The Passing of a Saint

On May 14, 2012, Ruth Alice Carter departed from her life on earth. To those who knew her, She was a ray of light, a beacon, one who could always be counted on. She was gentle and kind but always honest with Her assessment. She never said no to a friend or a neighbor who was in need. She gave selflessly her entire life. She ran her race and finished in a spectacular fashion. She will stand at the dais of Christ to receive her reward and will undoubtedly go on to lead thousands upon thousands in Christ's Army. She had learned what so many Saints fail to grasp, forgive all trespasses and love others the way God loves us. She understood the meaning of Grace.

As she reposes at Mount Olive, God continues to perfect His plan while Lord Jesus assembles the Saints who will reign with Him for a thousand years. Her very next conscious moment will be one of such joy and happiness. She will be raised incorruptible. She will be perfect. She will reign with Her Lord and Savior until all enemies have been defeated.

1 Corinthians 15:52 In a moment, in the twinkling of an eye, at the last trump: for the trumpet shall sound, and the dead shall be raised incorruptible, and we shall be changed. (KJV) 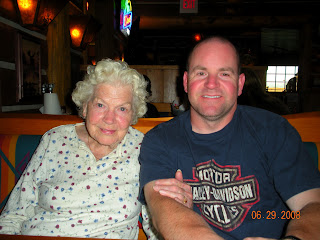 1 Thessalonians 4:13-18 But I would not have you to be ignorant, brethren, concerning them which are asleep, that ye sorrow not, even as others which have no hope. For if we believe that Jesus died and rose again, even so them also which sleep in Jesus will God bring with him. For this we say unto you by the word of the Lord, that we which are alive and remain unto the coming of the Lord shall not prevent them which are asleep. For the Lord himself shall descend from heaven with a shout, with the voice of the archangel, and with the trump of God: and the dead in Christ shall rise first: Then we which are alive and remain shall be caught up together with them in the clouds, to meet the Lord in the air: and so shall we ever be with the Lord. Wherefore comfort one another with these words. (KJV)

She indeed awaits the voice of the Chief Messenger. Brothers and sisters do not be fooled, what awaits those who believe is not a life in the clouds strumming a harp and eating grapes. Christ is going to put you to work! All enemies will be defeated and you will have a role to play.

1 Corinthians 15:22-26 For even as, in Adam, all are dying, thus also, in Christ, shall all be vivified." Yet each in his own class: the Firstfruit, Christ; thereupon those who are Christ's in His presence; "thereafter the consummation, whenever He may be giving up the kingdom to His God and Father, whenever He should be nullifying all sovereignty and all authority and power." For He must be reigning until He should be placing all His enemies under His feet. The last enemy is being abolished: death. (Concordant Literal) Do you believe the Word of God dear Saint? Grandmother certainly did and those who knew Her could not help but to know that She was a child of God. 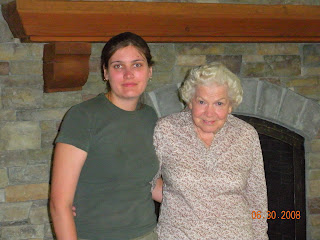 The obituary written by Her Grandson Mark Carter tells her brief story best:

RUTH ALICE MARSH CARTER was born to teacher-farmers in the Sutton community of Nevada County on May 17, 1919. She left to be with her Savior three days shy of her 93rd birthday on May 14, 2012 at her Little Rock home of 59 years. She passed quietly in the night, reclined in her favorite chair, realizing an eternal reward for a life of devotion to Jesus Christ, hard work and sacrifice.

Family and friends knew Ruth Alice as a staunch defender of her children, grandchildren and great-grandchildren, each of whom had no stronger advocate. She was a constant in their lives, her home a storm cellar from which her kids - spanning three generations - could find shelter from life's travails. It could be said that Ruth Alice herself was a force of nature.

Living independently until the end, Ruth Alice continued to play an active role in the lives of her kids. She daily tended her large garden behind the Forest Hills home she bought in 1953 after moving to the city from just outside the Rosston community two years earlier.

Ruth Alice was a graduate of Prescott High School and the former Draughan School of Business in Little Rock. She was a matriarch, a bookkeeper, a gardener, a conservative, a square dancer, a critical voice when necessary, a shoulder to lean on, a child of Christ.

Grandmother is missed more than she could ever realize, and the 4300 block of Maryland Avenue will never be the same, nor will the family and friends who were lucky enough to have her in their lives.

One of the greatest gifts that God has ever given me was for me to be with Her for the last six weeks of Her life. God recalled Her spirit just two days after I departed. The morning that I left, She woke up early and made me blueberry muffins for the road. I called Her twice later that day to thank her for the muffins but I did not reach Her either time. I learned later that She had heard the phone but was not feeling well enough to get up and answer it. The following day was May 13th, Mother's day. I was approaching Denver and wanted to pass through the traffic before I phoned Her to wish Her a Happy Mother's day.

At 1:01 PM my phone rang. I saw that it was Grandmother and I answered, "Hello Grandmother, Happy Mother's Day!" I thanked Her for the muffins and asked how She was feeling. She commented that She had not been feeling well but that She was feeling better. She was puzzled that I had answered the phone. Grandmother commented that She had dialed Matt's number, not mine. I asked are you sure, Yes. I dialed his number. It was a new phone and I thought maybe She had just pushed a redial button or something. I updated Her on my progress and we spoke for a total of 9 minutes and 34 seconds. She closed the conversation with "Well I guess the Lord just wanted to connect us one more time." I said I guess so...I love you. Little did I know, that would be the last time that I would speak to Her.

Each day at Her home was a unique adventure. She supervised the work Iryna and I did for Her. I worked mostly in the yard and Iryna in the kitchen. She closely monitored our progress as we sought to make her home more livable. We cooked daily and made for Her all of our favorites. She commented frequently that She was living "high on the hog". We had many, many long detailed conversations about the bible and our future reigning with Lord Jesus.

Throughout Her life, nothing was more rock solid than Her faith in Lord Jesus. During the last week of Her life She confided in me that She no longer worried about the eternal disposition of some close "Catholic" friends. I wondered in my heart if I may have had some influence in that matter. It was obvious to me that "religion" was not what drove Her, but love and sacrifice. Her understanding of what was truly important escapes most of the Saints today.  Galatians 5:14 For all the law is fulfilled in one word, even in this; Thou shalt love thy neighbour as thyself. (KJV)

She may physically be gone but Her presence remains with us. Her influence will remain with us throughout the rest of our lives. We lost a Saint but Lord Jesus just added a General to His Army. May His will be done in all things.
Posted by Mark at 12:15 PM

The truth shall set you free!

Acts 3:20, 21 And he shall send Jesus Christ, which before was preached unto you: Whom the heaven must receive until the times of restitution of all things, which God hath spoken by the mouth of all his holy prophets since the world began.
1 Timothy 2:3, 4 for this is good and acceptable in the sight of God our Saviour; Who will have all men to be saved, and to come unto the knowledge of the truth.
1 Corinthians 15:22 For as in Adam all die, even so in Christ shall all be made alive.
1st Timothy 4:10, 11 For therefore we both labour and suffer reproach, because we trust in the living God, who is the Savior of all men, specially of those that believe. These things command and teach.
Do you believe the bible or do you believe the false teachers in the pulpits? Why would you believe the doctrines of man over what the bible teaches?